Transformers Robot in Disguise Warrior Class Night OPS Bumblebee
Expected to have one each year by now?
Maybe another Decepticon Bee coming on the way?

This bee is absolutely the same as the yellow bee. Same mold, same weapon nothing changes. What really surprise me is the RID phone game on google store right now. Hasbro is making every toy from RID into that game including repaints.  Not to mention different classes of the same character gets a different image/skin inside the game as well.  Why putting so much effort into the game when I hardly see anyone plays it.
Another mystery of Hasbro’s marketing ~~ In some angles this Bee sure looks like an evil Decepticon with a cold smile. Seriously! Why yellow wheels???
They are really bothering me.  I even bought the Legion Class and that tiny guy has grey wheels instead of yellow…
JUST WHY YELLOW.? If it wasn’t for the yellow wheels, I would pick this as the best Bee out of the 3 (Night ops, TakaraTomy and Hasbro)
This Bee is not the last Bee, I have seen the Energon upgraded Bee from TakaraTomy’s announcement.  So I will be waiting for it while playing with my UW-01 Superior ~ YEAH 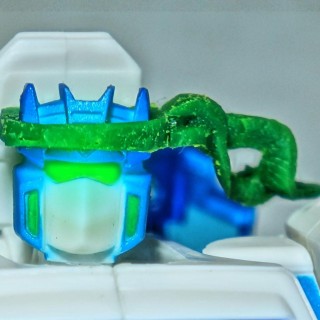